Book ~ "Saving Sadie: How a Dog That No One Wanted Inspired the World" (2017) Joal Derse Dauer and Elizabeth Ridley

From Goodreads ~ Joal Derse Dauer was just donating blankets at a local no-kill shelter when a disabled and despondent dog caught her eye. With three "fur babies" already at home, Joal wasn't looking to adopt another dog. But there was something special about Sadie, a shepherd mix who had been shot in the head and in the back and left for dead in the hills of Kentucky after giving birth. One gaze into those sorrowful eyes and Joal vowed to do everything possible to get the pitiful creature walking again.

The first three vets offered little hope for Sadie and two even recommended euthanasia. But with patience, hope and plenty of love, Joal noticed a change in her canine companion. And somewhere along the difficult journey, she discovered that sweet Sadie had transformed her life in ways she never could have imagined.

Now, media darlings Joal and Sadie are spreading their message of compassion, acceptance, and kindness around the world. Joyous and inspiring, "Saving Sadie" is a triumphant story about the power of unconditional love and second chances - for humans and animals alike. 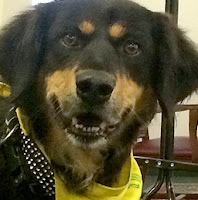 I love reading stories about animals and that's why this one caught my attention.

Joal has a big heart where animals are concerned and donated to animal shelters.  She was donating to one and saw a dog named Sadie who had just given birth to puppies and was then shot between her eyes and in her back (leaving her paralyzed) and left to die in the woods in Kentucky.  Though vets suggested that the dog be euthanized, Joal felt Sadie deserved a chance and took her home for a day.  That day became a month, which became forever. 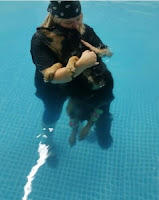 Joal put a lot of time, effort and heart into making Sadie the best she could be.  Sadie receives therapy including acupuncture, aqua puncture, cranial sacral, chiropractic, laser, e-stim, Power Plate and infrared therapy and is no longer fecally or urinary incontinent.

Along the way, Joal realized that not only was Sadie changing but so was she.  Their catchphrase became "Think about what you can do, not what you can't do - just like Sadie does" and they took up the banner of the anti-bullying movement.  Sadie has been featured in newspapers, radio, TV and even had a presence at the Golden Globes and the Academy Awards.

I liked the writing style and thought it flowed well.  I found Joal honest in her love of animals and her devotion of Sadie.

You can donate to help Sadie walk again and to her ongoing therapies here.
By Teena in Toronto at 9:15 pm
Email ThisBlogThis!Share to TwitterShare to FacebookShare to Pinterest
Label(s): Books, Books - 2017, Elizabeth Ridley, Joal Derse Dauer, Published 2017