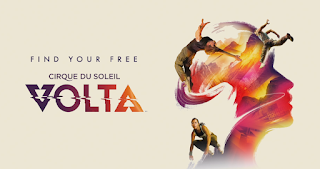 Freedom is the ultimate rush


VOLTA tells a spellbinding story about the freedom to choose and the thrill of blazing your own trail. Inspired in part by the adventurous spirit that fuels the culture of action sports, the show weaves acrobatics in a visually striking world driven by a stirring melodic score.

VOLTA is a story of transformation. It is about being true to oneself, fulfilling one’s true potential, and the power of the group to make that possible. It celebrates freedom as a movement.

WAZ, a popular gameshow host, has lost touch with his inner self in the pursuit of fame. But as doubt sets in, WAZ is enlightened by childhood memories as he encounters FREE SPIRITS who open doors to his inner soul he has long kept shut. On his high-voltage search for meaning, will WAZ find the courage to relinquish his fame, reconnect with his true self, and shine bright?

It takes place in a tent that has been set up in a parking lot by the east end of Toronto Harbour. 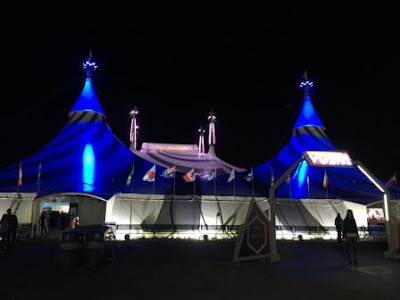 There are lots of souvenirs you can buy at the Cirque Shop in the lobby, along with drinks and snacks. 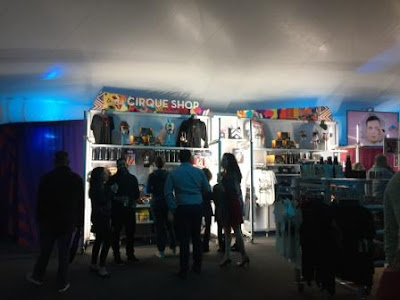 Here's the stage from our seats before it started.  We were in section 200, in the middle of the row.  I like being a bit higher up with Cirque shows so I can see everything. 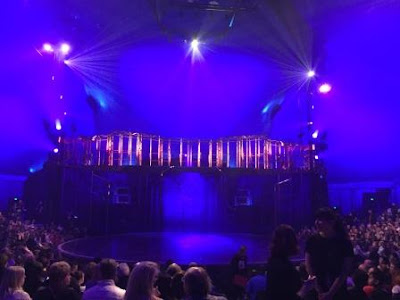 This is the fourth Cirque show I've seen (I've seen six in total ... I saw two twice).  Usually I have no idea what the story is about but that doesn't matter because the shows are amazing.  This time, though, I did understand the story as it was unfolding.

There is a large cast and there is always something going on.  There are BMX biker riders, a bike and ballet duo, rope skipping, acrobatic ladders and more.

Gord and I both enjoyed it.

The show just started on Thursday and runs 'til November 26 ... you should check it out!
By Teena in Toronto at 10:30 pm
Email ThisBlogThis!Share to TwitterShare to FacebookShare to Pinterest
Label(s): Live theatre, Live Theatre: Cirque du Soleil

We saw it when it was here in the Ottawa area. I thought the story seemed unfinished but I always enjoy Cirque!