Through a hilarious combination of running tips, narrative, illustrations and infographics, Cohen breaks down the misery that is forcing yourself to run. From chafing to the best times to run, explaining the phenomenon known as the "Oprah Line," and exposing the torture that is a pre-marathon expo, Cohen acts as your snarky guide to every aspect of the runner's experience.

Offering both real advice and genuine commiseration with runners of all skill levels, "How to Lose a Marathon" lets you know that even if you believe that the "runner's high" is a complete myth, you can still survive all 26.2 miles of a marathon. 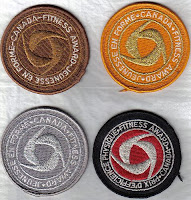 I've always wanted to be a runner but never have had the wind for it.  I remember back in grade four or five when we had to do athletic tasks to qualify for Canada Fitness Award Program badges, I'd have a hard time with the running part ... and I was a skinny kid back then.

I have a couple friends who do 5km runs and marathons, which I find inspiring, and a couple weeks ago I decided I'd try to become a runner.  Even if I never go into a 5km run, I figured it would be a good cardio workout.  I found a "Couch to 5km" running program and downloaded the app ... it takes eight weeks of training three times a week.  I got through the three days of week one.  Because of my work schedule last week, I didn't get to the gym at all so I'll get back at it and do week two this week.

In 2012, Joel was overweight, lazy and approaching middle age.  One day, he decided he was going to start running.  Rather than doing it in an organized manner (like I am), he just started running and eventually he was running faster and longer distances.  Then he was inspired to run a marathon and that's when he started following a program.

I liked the writing style as Joel wrote about his experience starting to run and eventually being in the New York Marathon.  There was valuable information and it was presented in an amusing manner (rather than dry and boring) ... Joel is a writer on The Simpsons, among other things, and that comes through.  There are also his doodles throughout the book.  The book covers why he started running right up to the mile-by-mile description of when he was in the New York Marathon in 2013.  There is an explanation of the various terms, essential items you need (and those you don't), etc.

The author admits he doesn't enjoy running ... he does enjoy having run, though.  I'm finding it boring (I need to be stimulated and haven't gotten into "a zone") but I find listening to tunes helps (I can run the running app and my Spotify app at the same time).  I had thought about downloading books and listening to them to keep me distracted and this is what Joel did so I'm going to try that.

I would recommend this book for those wanting to get into running so you'll know what to expect, what you need to do and yes, you can do it!  Runners will also enjoy it because they will be probably be able to relate to Joel's experiences.
By Teena in Toronto at 11:30 pm
Email ThisBlogThis!Share to TwitterShare to FacebookShare to Pinterest
Label(s): Books, Books - 2017, Canadian, Canadian 2017, Joel Cohen, Published 2017