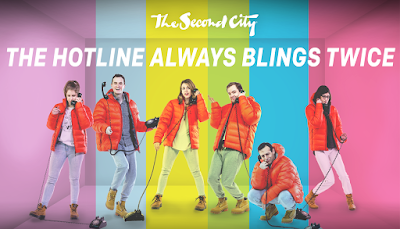 Gord and I saw The Hotline Always Blings Twice at Second City tonight. 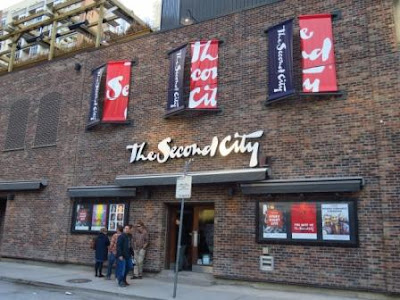 Enjoy a night of unforgettable characters, supremely funny sketches, and ridiculous rants created by the cast the Toronto Star calls “six of the funniest people you could hope to meet.”

"The Hotline Always Blings Twice" is an all-new comedy confection in the legendary tradition of The Second City, where nothing is sacred and almost anything can be hilarious. Laugh out loud as we skewer everything from blind dates, to binge-watching, to Blue Jays bandwagoners.

This is the third show at Second City we've seen in the last year.  The cast is excellent and it's amazing how quickly they jump from one character to another and make them so believable.

This show is hilarious!  Etan Muskat opened the show with a funny passionate speech encouraging Canada to build a wall to keep anti-Trump Americans out ... #buildawall.

The bit with a dad (Kevin Whalen) and his nine-year-old daughter (Kirsten Rasmussen) spending her birthday wat her first Blue Jays game as one of my favourites.  They were sitting next to a die hard fan (Kyle Dooley) who continually craps on them for jumping on the Jays bandwagon.  Another of my favourites was Whalen as a Syrian refugee’s show-and-tell speech comparing the hardships he's had to endure compared to what we complain about here.  Another favourite was the three girls playing second graders at a concert.

I'm looking forward to their next show.  We'll be checking it out!
By Teena in Toronto at 9:30 pm
Email ThisBlogThis!Share to TwitterShare to FacebookShare to Pinterest
Label(s): Live theatre