Gord and I saw Kinky Boots this evening.  I had enjoyed the movie (from 2005) so was looking forward to seeing the musical.

With songs by Grammy and Tony winning pop icon Cyndi Lauper, this joyous musical celebration is about the friendships we discover and the belief that you can change the world when you change your mind.

Inspired by true events, Kinky Boots takes you from a gentlemen’s shoe factory in Northampton to the glamorous catwalks of Milan. Charlie Price is struggling to live up to his father’s expectations and continue the family business of Price & Son. With the factory’s future hanging in the balance, help arrives in the unlikely but spectacular form of Lola, a fabulous performer in need of some sturdy new stilettos.

Take a step in the right direction and discover that sometimes the best way to fit in is to stand out.

It was at the Royal Alexandra Theatre. 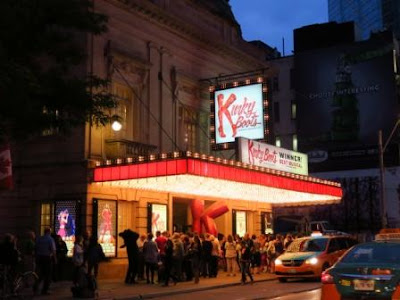 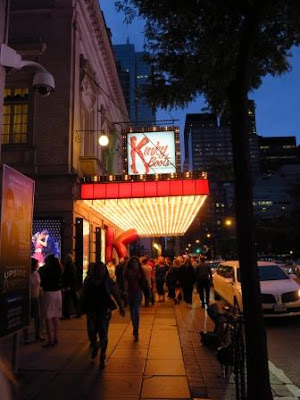 It was well-done ... fun, colourful and lively!   Not surprising there was loud standing ovation when it was over.  Though all the actors did a great job, Alan Mingo Jr. as Lola/Simon really stood out for me.  Daniel Williston was good as Lola's bully who learns a lesson about accepting people as they are (seeing him in thigh high boots at the end was a hoot).


It's here 'til December and you should go see it!
By Teena in Toronto at 10:45 pm
Email ThisBlogThis!Share to TwitterShare to FacebookShare to Pinterest
Label(s): Live theatre, Live theatre: Mirvish

I thought Alan Mingo was incredible - one of the best performances I have ever seen in a musical. That is such a tough role - could be overacted or corny but he did it with such restraint - the minute he walked on stage I just loved him - I have tickets to see it again. Glad you enjoyed!!