When we took Morgan and Crumpet to the vet in October 2013 for a check-up, Crumpet was the perfect weight and Morgan was overweight (he's always been a tubby boy).

I noticed in March 2014 that Morgan had lost a lot of weight quickly so took him to the vet.  He had lost four pounds since October!  I asked for bloodwork to be done (he was going to be 12 in August) and it came back that his glucose level was high.  A urinalysis showed that he had become diabetic.  The normal blood glucose level for cats is 4.4 - 6.6 mmol/L ... his was 28!

Cats will generally show a gradual onset of the disease over a few weeks and it may escape notice for a while. The condition is unusual in cats younger than seven years old. The first obvious symptoms are a sudden weight loss (occasionally gain), accompanied by excessive drinking and urination; for example, cats can appear to develop an obsession with water and lurk around faucets or water bowls. Appetite is suddenly either ravenous (up to three-times normal) or absent. The back legs may become weak and the gait may become stilted or wobbly.  Owners should watch for noticeable thinning of the skin and apparent fragility: these are also serious and indicate that the animal is metabolizing (breaking down) its own body fat and muscle to survive. Lethargy or limpness, and acetone-smelling breath are acute symptoms indicating likely ketoacidosis and/or dehydration and demand emergency care within hours.

Here's my boy in mid-April 2014 when we discovered he was diabetic doing what he does best.


We learned how to treat his diabetes.  We had to give him insulin shots twice a day.  Here's what's involved when you have a diabetic kitty: 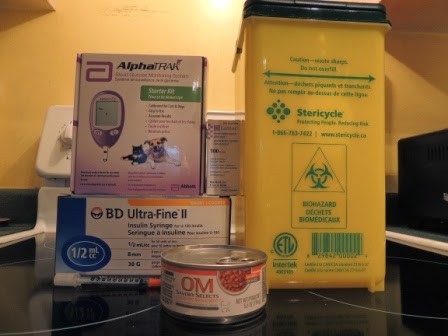 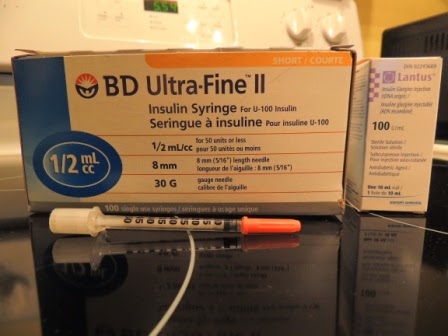 Morgan has to eat before he gets his insulin.  To ensure he's eaten, we switched him from always having a bowl of kibble out to feeding him an overweight management soft food twice a day.  We also switched Crumpet over to a healthier diet of soft food (essential care) from the vet. 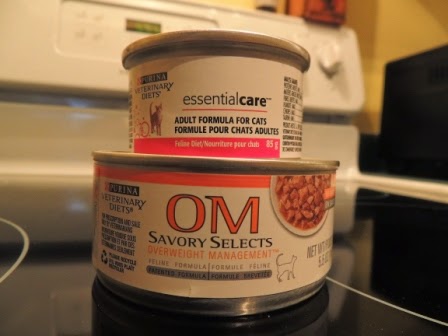 Morgan didn't like his food so we've been feeding them both what was recommended for Crumpet (the vet is okay with that).


We were giving Morgan 0.5ml insulin twice a day.  I noticed that his appetite had picked up, he gained weight back, he was peeing less and his glucose level stayed within the normal range.

Glucose levels are checked by testing blood from the vein in one of his ears. 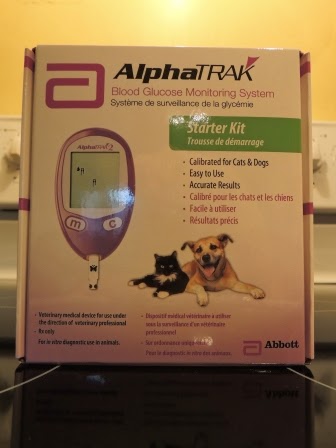 Within a week or so (by the end of April 2014), though, his glucose level went down below that of a non-diabetic kitty, which could be fatal.  I let our vet know right away and he said not to give Morgan any insulin 'til his glucose level is 15 or more ... it stayed within the range of a non-diabetic kitty.  I monitored it twice a day for a month or so and then the vet said that once a month would be okay.

I monitor Morgan's glucose level twice a day.  If it's higher than 15, I give him 7ml of insulin.  If it's lower, I don't (as per the vet).  He's fallen into a pattern where every day and a half, he needs 0.7ml insulin.  The vet says that that's his "normal".

By Teena in Toronto at 11:00 am
Email ThisBlogThis!Share to TwitterShare to FacebookShare to Pinterest
Label(s): Furkids

awww ,poor guy. Glad you were able to catch it. Looks like he's doing fine though.

Poor Morgan! It seems like he's doing ok though, right?

Poor Morgan. Glad you took him to the vet!

Aww that's too bad. All the best.

Poor morgan. my sister had a diabetic kitty and it is a lot of work but what a lucky feline that you are going to care for him when so many people would view it as too much work! kudos!!

Ohh poor kitty! And poor you - it must be hard work, I can't imagine having to inject either of mine, they'd bite my hands off!

Plus, it must cost a fortune all those meds!

Today we had to say goodbye to our 14+ years old cat who's been diabetic for the past 3 years.
We're now left with 65 Caninsulin U-40 syringes of 1cc (1ml), and one brand new 10ml bottle of insulin - Caninsulin 40 IU/ml.

What we used is different than what you administer to Morgan, but definitely usable if you get the vet to prescribe the right dose.

Let me know if you'd be interested yourself, or you know someone who might be. As you know, they're well worth about $100 and we'd gladly donate them to a cat lover.

You can drop me a line at danielboghiu@yahoo.com

All the best,
Daniel

I'm sorry for your loss, Daniel.

Glad to hear is is doing better. He's lucky to have you to look out for him.

He's looking as handsome as ever due to your looking after him so well!!