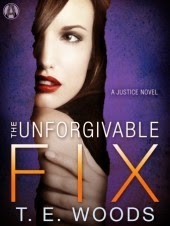 From Goodreads ~ Detective Mort Grant of the Seattle PD has finally decided to sell. The home where he and his late wife raised two kids feels too large and too full of old memories. His son is married and raising a family of his own, and despite desperate efforts to find her, Mort has lost touch with his wayward daughter. That is, until the day she walks back into her childhood home and begs for his help.

For the last four years, Allie Grant has been the lover - and confidante, confessor, and counselor - of one of the world’s most powerful and deadly men. But a sudden, rash move has put Allie in the crosshairs of a ruthless Russian crime lord. Mort knows of only one place where Allie will be safe: with The Fixer.

As a hired desperado, The Fixer has killed twenty-three people - and Mort was complicit in her escape from the law. She has built an impregnable house, stocked it with state-of-the-art gear, armed it to the teeth, and locked herself away from the world. But even The Fixer may not be able to get justice for Allie when real evil comes knocking.

Allie took off years ago and has been living with Patrick, a drug kingpin. Patrick does something stupid and, scared of the retaliation against her, Allie returns home to seek protection from her father, Mort, who is a police detective.  Mort asks Lydia, a therapist, to let Allie stay with her.  Lydia was once "The Fixer" ... you could hire her to fix situations.  Against her better judgement and her dislike of Allie, Lydia lets her move into her home.

In the meantime, Lydia returns to her practice and starts taking on new clients.  She also agrees to taken on an intern named Zack to help him get the practice he needs.  Things get complicated when a cop starts investigating the treatment of some of their patients.

This is the third book I've read by this author and the third in the Mort Grant series (I've read all three) ... I liked it.  Though it is part of a series, it can be read as a stand alone as there is enough information provided.  It's written in third person perspective and had more of a focus on Lydia.  As a head's up, there is swearing.

I've like Mort in all three books.  He's a good cop and despite that fact Allie knew what she was doing by hooking up with Patrick, he still welcomed her back as if nothing had happened.  I didn't find Allie likeable at all ... she was extremely manipulative and definitely a survivor.  I found Lydia to be less cold in this book and liked her more than in the last one.
By Teena in Toronto at 11:00 pm
Email ThisBlogThis!Share to TwitterShare to FacebookShare to Pinterest
Label(s): Books, Books - 2014, Published 2014, T.E. Woods