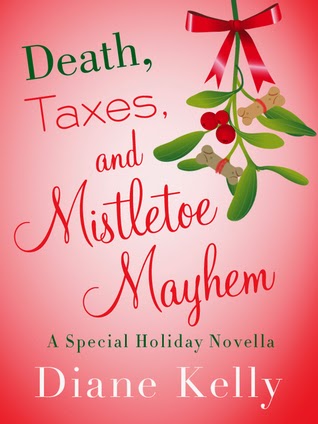 Her investigation takes her to Chisholm Trail mall, where she meets Fort Worth Police Officer Megan Luz and her fluffy K-9 partner, Brigit. Though Megan believes Tara is barking up the wrong tree, she agrees to provide backup if a bust goes down.

Moreover, they decide to team up as matchmakers to find love for Chris Rasmussen, a pediatric nurse who moonlights at the mall playing Santa Claus. Chris has a warm heart and a body that’s hot enough to melt to the polar ice caps. This sexy-yet-sad shopping mall Santa was recently dumped by his fickle fiancée, leaving the not-so-old elf more jilted than jolly. Can Tara and Megan solve the crime ... and lift Santa’s spirits in time for Christmas?

Tara is an IRS criminal investigator and her boss assigns her a case.  It's Christmas and Tara would rather be shopping but she gets on with the job.  She's investigating a jewelry wholesaler who has had a serious of mysterious robberies.  Tara discovers a clue and poses as an auditor in a jewelry store in a mall to dig through their files.  There she meets Megan and her K-9 partner, Brigit, who agrees to be back-up in case Tara needs it.

In the meantime, the hunky Santa in the mall is recovering from being jilted by his ex-fiancée.  The woman who runs the Victoria Secret store is recovering from a recent divorce.  There are sparks between them but they won't act on it so it's up to Tara and Megan to bring them together.

This is a novella (#6.5) in the Tara Holloway series.  I've read all seven novels (so far) in this series and have enjoyed them (it's the ninth book I've read by this author).  I liked the writing style ... it was funny and sarcastic.  And because it's a novella, it's a quick read.  It works as a stand alone as there was enough information so you know what's going on.  Plus because it's a novella, it doesn't get into a lot of detail.

This book is written in first person perspective from three points of view ... Tara's, Megan's and Brigit's.  And yes, it works.  It's especially funny when it's Brigit's perspective.  It is an introduction to Megan and Brigit who were featured in their own novel early this year, Paw Enforcement, which I read and enjoyed ... it was how I discovered the author in the first place and since become a fan.  I liked Tara, Megan and Brigit working together.

By Teena in Toronto at 10:30 pm
Email ThisBlogThis!Share to TwitterShare to FacebookShare to Pinterest