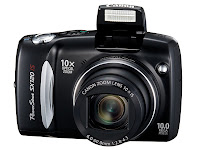 I loved it and used it a lot (it was small and always in my bag).  I had a couple issues with the flash (it would stop working) but because I had bought an extended warranty, I would get it repaired for free.

The flash stopped working and I brought it in to be repaired in February 2012.  I was told that it was too old and not worth fixing so I could get a replacement instead, which was the updated PowerShot.  Sweet! 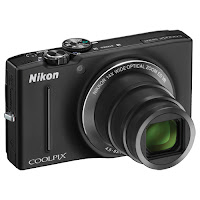 Or I could take the value and get a different camera (and pay any difference). The sales guy recommended that I get the Nikon Coolpix S8200 instead so that's what I did.  I like it okay but once I started using it, I soon realized I missed my Canon.  Plus Gord has one so when I used his, I'd wish I'd listened to my heart and gotten the Canon.

It wasn't until Gord and I took the camera course in the spring and I learned about aperture and shutter priority that I realized the Nikon doesn't have them.  Up until that point, I didn't know what they were so never missed them.  I've since become a big fan of shooting in aperture priority and that's all I do with my Nikon D5100.

When I got home today, there was a box on my laptop.  Gord had gotten me a Canon PowerShot SX150 IS.  What a nice surprise!  Though I thanked him for his thoughtfulness, I asked him to take it back.  I gave him lots of reasons.  My Nikon Coolpix works fine so it doesn't make sense to have a new camera.  I said I'd taken a raincheck ... when the Nikon dies, he can then buy me a new one.  We just got back from vacation and are still paying the bills on it.  I said he could give me the $$ and I'll put it towards a lense for my Nikon D5100.

In the end, he wouldn't hear of it.

So I spent about an hour this evening pouring over the manual to learn more about the cool updated features.

Update:  Though this camera is the updated version, there is one thing about it that really bugs me.  When I need to use the flash, it sometimes takes a while for it to "charge".  There is a message on the screen that actually says that it's charging.  So I have to wait ... and miss the shot.  I have high quality rechargeable batteries in it so it's definitely the camera.  If you take a lot of pictures where you don't use the flash, it's a good camera.  But if you need the flash, it's sucks :(
By Teena in Toronto at 7:30 pm
Email ThisBlogThis!Share to TwitterShare to FacebookShare to Pinterest

AWESOME! I am currently taking photos with my phone since I have no camera, but I hope to get one for my birthday. I love taking photos :)

I used to be all Canon, I still have a pocket canon camera, an SD1300. I started out with the original Canon Rebel when I was in photography school but after graduating and upgrading Rebels, I upgraded again to the Nikon D60 because I liked the low light capabilities of Nikon over Canon. Last spring (2011), I bought myself the Nikon 300s and I love it! I was on maternity leave and wasn't photographing professionally with it yet, but I love it.