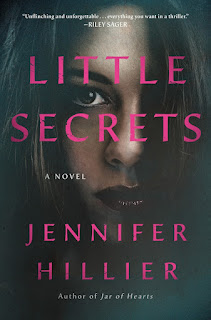 From Goodreads ~ Marin had the perfect life. Married to her college sweetheart, she owns a chain of upscale hair salons and Derek runs his own company. They're admired in their community and are a loving family - until their world falls apart the day their son Sebastian is taken.

A year later, Marin is a shadow of herself. The FBI search has gone cold. The publicity has faded. She and her husband rarely speak. She hires a P.I. to pick up where the police left off but instead of finding Sebastian, she learns that Derek is having an affair with a younger woman. This discovery sparks Marin back to life. She's lost her son; she's not about to lose her husband, too. Kenzie is an enemy with a face, which means this is a problem Marin can fix.

All it takes to unravel a life is one little secret.
It's Christmas and Marin and her young son, Sebastian, are at the market. She is distracted by a phone call and a few seconds later discovers Sebastian is gone. More than a year later, Sebastian has never been found and Marin lives with terrible guilt. Even after the police and FBI give up looking for Sebastian, Marin holds out hope that he will be found and has had a private detective still looking. When the private detective calls her with an update, Marin assumes it's news about Sebastian but it's not ... Derek, her husband, has been having a six month affair with Kenzie, a younger woman. For the first time in a long time, Marin feels something ... rage ... and she wants Kenzie gone permanently. As it turns out, she has a friend who has a friend who can make that happen.
I've read other books by this author and like the others, I liked it. I thought the story moved along at a good pace, going back and forth in time, providing backstories. I found it odd, though, that Marin would blame Kenzie for the affair and want her killed rather than Derek. It is written in third person perspective with a focus on where the action was. As a head's up, there is swearing and violence.
By Teena in Toronto at 5:48 pm
Email ThisBlogThis!Share to TwitterShare to FacebookShare to Pinterest
Label(s): Books, Books - 2022, Canadian, Canadian 2022, Jennifer Hillier, Published 2020