Book ~ "No Baggage: A Minimalist Tale of Love and Wandering" (2016) Clara Bensen

From Goodreads ~ "No Baggage" is a memoir that will resonate with adventurers and homebodies alike - it’s at once a romance, a travelogue, and a bright modern take on the age-old questions: how do you find the courage to explore beyond your comfort zone? And can you love someone without the need for commitment, or any expectations for the future?

When Clara Bensen arranged to meet Jeff Wilson on the steps of the Texas State Capitol, after just a few email exchanges on OKCupid, it felt like something big was going to happen. Clara, a sensitive and reclusive personality, is immediately drawn to Jeff’s freewheeling, push-the-envelope nature.

Within a few days of knowing one another, they embark on a 21-day travel adventure - from Istanbul to London, with zero luggage, zero reservations and zero plans. They want to test a simple question: what happens when you welcome the unknown instead of attempting to control it? Donning a single green dress and a small purse with her toothbrush and credit card, Clara travels through eight countries in three weeks. Along the way, Clara ruminates on the challenges of traveling unencumbered, while realizing when it comes to falling in love, you can never really leave your baggage behind. 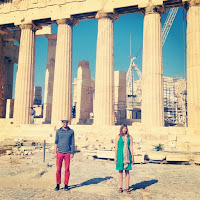 Clara and Jeff met online and are total opposites.  Clara is in her mid-twenties, an introvert and just getting over having a breakdown.  Jeff is a bit older, divorced with a five-year-old daughter, and has more of a spontaneous free spirit.  There was a spark when they met in person and they were instantly drawn to each other.  They both agree that they won't put a label on what they have and are free to see other people if they want.

Within a month, they head out on a three week vacation together.  They buy a one-way ticket to Istanbul and a one-way ticket home from London.  That's the only plans they have made ... they will figure everything else as they go along regarding where they'll sleep (they depend a lot on Couchsurfing), what they'll see and how they will get to different places.

Another condition is that they can't bring any baggage ... not even a backpack!

Jeff has one pair of cherry-red chinos, one Stetson cowboy hat, one pair of underwear, one pair of socks, a striped cotton shirt, an iPhone, a pair of earbuds, a charging cord, half a toothbrush, half a map of Eastern Europe, a notebook, a mechanical pencil, $200 in cash, one credit card and his passport ... it all fit in his pockets.

Clara has one green dress, three pairs of underwear, a cotton scarf, a black bra, a stick of lavender deodorant, a whole toothbrush, a retainer, a contact lenses case, a pair of backup glasses, two tampons, an iPhone, an iPad mini, a notebook, a pen, her passport, a tiny black shoulder purse, a stack of cowboy magnets to hand out as souvenirs and a tube of cherry Chapstick.

As much as I enjoy travelling, I couldn't do it the way Clara and Jeff did.  I need some structure and at least one change of clothes.  They saw so much and did so much, though, with literally nothing but the clothes on their backs and spending very little money.  They met some interesting people and had some fun adventures by just going with the flow.

I thought it was an interesting book.  The story jumps back and forth with them on the trip to detailing Clara's breakdown and depression to how she met Jeff.  At times, I found the writing dragged a bit when she started getting philosophical.  As a head's up, there is swearing and some adult activity.
By Teena in Toronto at 11:30 pm
Email ThisBlogThis!Share to TwitterShare to FacebookShare to Pinterest
Label(s): Books, Books - 2016, Clara Bensen, Published 2016