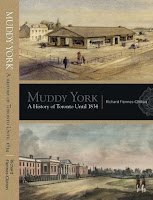 From Goodreads ~ In 1793, John Graves Simcoe established a plot of land along the shores of Lake Ontario as the site for the new capital of Upper Canada, which he named York. This engaging popular history provides a comprehensive overview of the early days of settlement, the devastation of the Battle of York, the emergence of industry and commerce, and introduces eminent families.

Emphasis is placed on the development of a streetscape, the built heritage of the time, and the people who laid the foundation for the emergence of Toronto in 1834. Significant participants are presented in the context of where they lived and worked, and major events in the life of York are introduced through the eyes of the people who witnessed them and the landmarks that shaped the town. 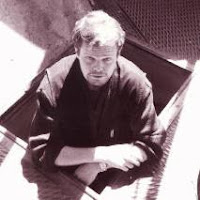 Richard Fiennes-Clinton is the owner of Muddy York Walking Tours.  Since 1997, he has been conducting a variety of tours and introducing visitors and residents to the secrets behind Toronto.  After reading his book, it's obvious he knows his stuff!

I was attracted to this book because  I am interested in the history of Toronto.  I knew some of its history but I learned a lot more.  It's amazing how intertwined the early families of York were as friends and with intermarriage.

This book covers the history of Toronto (aka Muddy York) from prehistoric times to 1834.  The chapters include:

I enjoyed this book and would recommend it.  I liked the writing style.  There is a lot of information but I didn't find that it dragged or was boring.  The way that it's written, you can read it from front to back (like I did) or you can turn to specific sections that interest you.

It was interesting to read about the history of the streets of York/Toronto, how they got their names and if they still exist today.  The same goes for the buildings around York.  There was a great amount of background about them and in most cases, a picture of what they used to look like.  It would have been nice to have a map with the buildings plotted and a picture of what the location looks like today since most of the buildings are unfortunately not around.
By Teena in Toronto at 8:32 pm
Email ThisBlogThis!Share to TwitterShare to FacebookShare to Pinterest
Label(s): Books, Books - 2016, Canadian, Canadian 2016, Published 2016, Richard Fiennes-Clinton