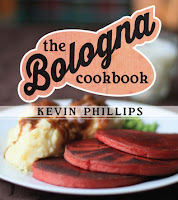 From Goodreads ~ Ex-military man and Canadian patriot Kevin Phillips grew up in Cape St. George, where he developed a love for the traditional dishes of his Newfoundland home. After high school, he joined the Canadian Armed Forces (CAF) and served for thirty-three years before retiring as a master warrant officer. During that time, he never forgot the old Newfoundland recipes of his youth. So immediately upon his retirement from the CAF, he rekindled his passion for cooking and began his new career as a chef!

Kevin’s initial plan was to resurrect and share some of his favourite old-time recipes online. He intended to focus on old lost recipes but as the number of bologna recipes increased to well over two hundred, he decided to concentrate entirely on bologna. Kevin quickly realized that bologna was not exclusive to Newfoundland. In fact, this sausage was enjoyed by people from all parts of the country, as well as by many of his readers overseas!

"The Bologna Cookbook" is Kevin Phillips’s first book, and the first ever all-bologna cookbook, featuring two hundred recipes whose main ingredient is ... you guessed it ... bologna! The cookbook outlines easy-to-make recipes for mouth-watering dishes that are a feast for the eyes and a delicious treat for the soul, such as Bologna and Eggs with Havarti, Bologna Caesar Wraps, Cheesy Bologna Calzones, Balsamic Peppercorn Bologna Steak, Bologna Stroganoff and more!

I was in Corner Brook and Stephenville, Newfoundland, last week and came across this book.  I like bologna and ate a lot of bologna sandwiches when I was a kid growing up in Nova Scotia.  I was never a fan of fried bologna (aka Newfie steak), though.  Gord, on the other hand, does like fried bologna and his paternal grandparents are from Newfoundland ... so, of course, I had to get him this book.

The book is beautifully done ... it's colourful and glossy.  The recipes are laid out well and there is a colour picture for each one.

Here are a some dishes from the book so you can see that bologna isn't just for sandwiches!