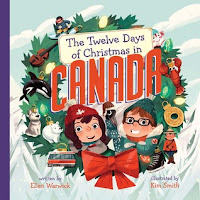 From Goodreads ~ O Canada, in Christmastime! Come with Juliette and her "crazy Canuck cousin" as they take a holiday trip across the country, all the way from Prince Edward Island and vieux Québec to Winnipeg and Vancouver.

Along the way Juliette gets really cool Canadian gifts - like 8 bears a-swimming, 6 Mounties marching, and a loon in a maple tree!

Juliette is heading to Canada to spend the Christmas holidays with her grandmother and cousin, Theo.

They start off in Charlottetown, PEI, and finish their travels in Victoria, BC, making their way by plane, train, car, boat and even dog sled!  Their travels are recorded in letters that Juliette is sending back home to her parents.  In keeping with the 12 days of Christmas, Juliette gets some great Canadian gifts along the way ... like a loon in a maple tree, two mummers' masks, three lobsters, etc.

Along the way, they do a lot of exploring and learn about the regions.  For example, did you know that from 1928 to 1971, one million people from all over the world arrived at Pier 21 in Halifax by sea to start new lives in Canada?  Or that Quebec produces 77% of the world's supply of maple syrup?

This is a children's book that is entertaining AND educational.  It is colourfully illustrated and there is a lot of attention to detail. 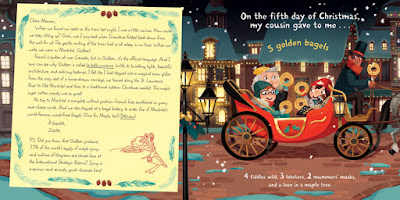 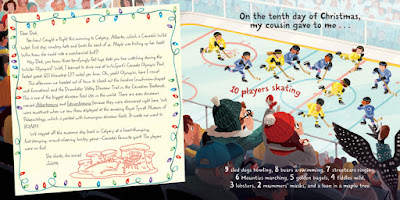 At the end, there are a couple page with facts about amazing Canadians, awesome Canadian inventions (such as the telephone and instant mashed potatoes), cool Canadian records (the world's tallest recorded female was born in Nova Scotia in 1846), wacky Canadian landmarks (the world's largest hockey stick is in Duncan, BC), astounding Canadian history (the hottest recorded day in Canada was 45C/113F in 1937 in Yellow Grass, SK) and glorious Canadian nature (Canada has about 60% of the all the world's lakes [about three million]).
By Teena in Toronto at 12:30 am
Email ThisBlogThis!Share to TwitterShare to FacebookShare to Pinterest
Label(s): Books, Books - 2015, Canadian, Canadian 2015, Ellen Warwick, Kim Smith, Published 2015