Gord and I saw Once this afternoon (the 2pm show).

Set in modern day Dublin, "Once", is the story of a Guy who gave up on his music - and his love - and the Girl who inspired him to dream again. This irresistibly breathtaking production is performed by an extraordinary all-Canadian cast of actor-musicians who sing, dance and play their hearts out live on stage.

Directed and choreographed by the brilliant team of Tony Award winner John Tiffany and Steven Hoggett, "Once" will dazzle you with its originality, wit and unforgettable music.

Featuring all of the magical songs from the critically-acclaimed film, including the Oscar-winning "Falling Slowly," this achingly beautiful, joyously uplifting show draws you in from the very first note, and never lets you go. Everyone's falling for "Once" …come and find out why.

Gord had gotten the tickets through an auction for the United Way at work.

It is playing at the Ed Mirvish Theatre on Yonge Street until May 31. 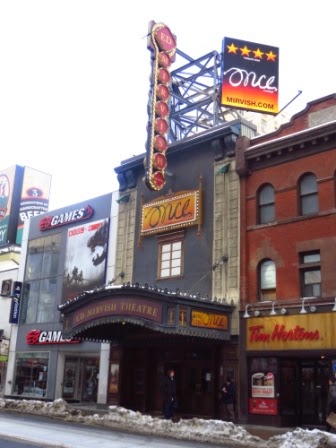 If you get there early, you can go up on stage, which is set up like a pub.  You can even order a drink from the bar on stage.  The actors gradually come onto the stage.  At 1:50pm, they started singing and playing their instruments and the audience is led off the stage.  At 2:15pm, the lights went down and the story began.  There was a 15 minute intermission and Gord and I went up on the stage to check it out ... very cool.

I enjoyed the play and think the actors did a fine job.  There was humor and sorrow.  I liked the music ... the livelier tunes were fun and the ballads were heartfelt.  You can check them out here.

There are 12 in the cast and they are all almost always on stage.  The actors are also the musicians and they play instruments including guitars, a piano, violins/fiddles, drums, etc.   When they are not part of the action, they are sitting in chairs on the left and right side of the stage.  They also move the props around (tables, chairs, etc.) and are subtle or more in-your-face about it depending on the scene.

Some of the characters are Czech and when they speak in their language, they speak in English but there are subtitles above them in Czech which was interesting.

It's apparently based on a movie and Gord and I are going to check it out.
By Teena in Toronto at 4:30 pm
Email ThisBlogThis!Share to TwitterShare to FacebookShare to Pinterest
Label(s): Live theatre, Live theatre: Mirvish