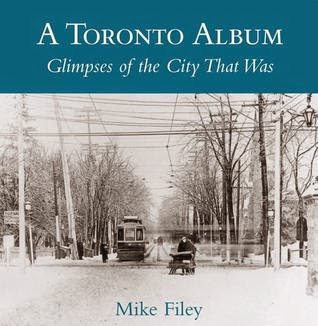 From Goodreads ~ Mike Filey's collection of pictures of Toronto from the earliest days of photography had gained a reputation as one of the most interesting visual archives of the city's history.

This classic look at old Toronto portrays scenes of public life from 1860 to 1950, illustrating how dramatically the urban fabric and environment have changed. There are photographs of the beaches and the islands, of mud streets and gas lamps, of steam engines and trolley cars, amusement parks and the everchanging waterfront. Especially striking are the early photographs of downtown and the aftermaths of the fire of 1904.

It will appeal to Torontonians young and old - and to anyone interested in the evolution of one of the world's fastest growing cities.

Mike Filey had a column in the Toronto Sun for about 30 years and I read it for many years (I like learning about the history of Toronto).  I've read all his books where he compiles some of his columns.  In this book, Filey includes photographs with a description of what the picture is and what was going on at the time.

He starts by showing pictures of downtown Toronto (King/Yonge) about 1860 with dirt roads with most buildings no longer around.  He covers transportation, the growth of the city, Toronto Island, ships/boats, delivery trucks and more.

I thought the Police Commissioners' by-laws from the late 1880s re horse traffic were funny:

Even though it was originally published in 1972 and reprinted in 2001, it was an interesting book because the pictures of older Toronto were great. If you live in Toronto or are from Toronto, you should check it out.
By Teena in Toronto at 10:30 pm
Email ThisBlogThis!Share to TwitterShare to FacebookShare to Pinterest
Label(s): Books, Books - 2015, Canadian, Mike Filey, Published 2001, The Canadian Book Challenge 8