From Goodreads ~ "A Toronto Album 2", companion edition to Mike Filey's immensely popular original album, is a photographic journey through bustling Toronto from the late 1930s to the early 1970s.

Among the 100-plus photographs is a quartet that shows the remarkable changes to Toronto's skyline over a half-century. Others capture the 1939 royal visit, steam trains in their twilight years, the evolution of the Hospital for Sick Children, a look at Christmas past, and glimpses of a few landmark buildings we weren't smart enough to keep. "A Toronto Album 2" is a keepsake Torontonians will treasure.

Mike Filey had a column in the Toronto Sun for about 30 years and I read it for many years (I like learning about the history of Toronto).  I've read all his books where he compiles some of his columns.  In this book, Filey includes over 100 photographs with a description of what the picture is and what was going on at the time.

Filey mentioned the Avon Theatre.  When I moved to my 'hood in 2001, there was a rent-to-own store with a marquee above the doorway on the NW corner of Dovercourt/Queen Street W.  A few years later, Starbucks took it over. 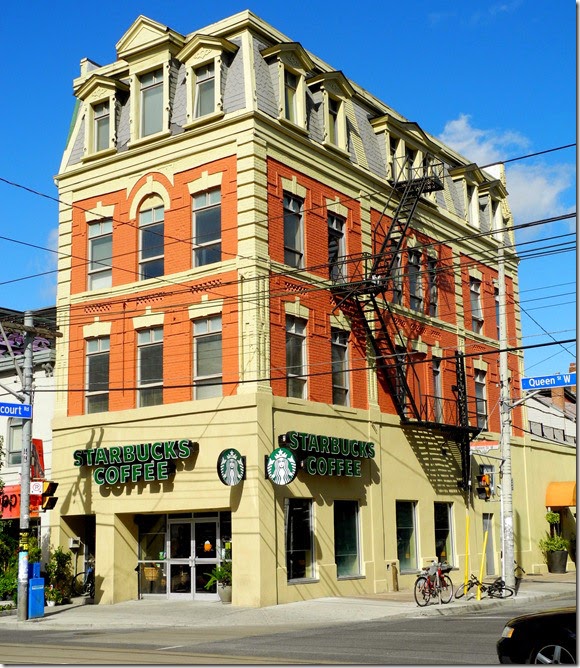 The building was constructed in 1887. The ground floor contained a fruit market, with apartments above it. It remained a retail outlet until 1915, when Child’s Theatre opened on the premises. This theatre lasted only a year and then it became King’s Hall and King’s Playhouse Theatre, operated by Mr. King Hyman. In 1950, it became the Avon Theatre, a 325 motion picture theatre.  Source:  Historic Toronto

Even though it was published in 2002, it was an interesting book because the pictures of older Toronto were great. If you live in Toronto or are from Toronto, you should check it out.
By Teena in Toronto at 4:30 pm
Email ThisBlogThis!Share to TwitterShare to FacebookShare to Pinterest
Label(s): Books, Books - 2015, Canadian, Mike Filey, Published 2002, The Canadian Book Challenge 8