From Goodreads ~ Craig Russell was an internationally admired entertainer and actor, known for his outrageous impersonations of some of Hollywood's greatest female celebrities: Mae West, Barbra Streisand, Bette Midler, Carol Channing, and Judy Garland, to name a few. Lori Russell Eadie, a shy theatre lover, was Craig's No. 1 fan and, eventually, his wife.

Together they were fun, fabulous, and eschewed convention. But behind the curtains, Craig and Lori's lives were troubled by their mental health, drug addiction, sexual assault, and abuse.

Through nearly one hundred interviews and extensive research, Outrageous Misfits reveals the life and legacy of one of the world's most popular female impersonators and his biggest fan. 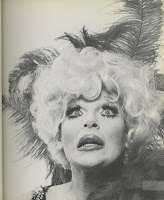 Craig Russell (1948 - 1990) was a Canadian female impersonator and actor.  He was born and passed away in Toronto.  To the disappointment of his father, growing up he was more interested in girly things.  As a teenager, he started a Mae West fan club and realized his dream by briefly working and living with her in California.  When Craig returned to Toronto, he worked as a hairdresser and started pursing his career as a female impersonator in gay clubs around Toronto.  Eventually he became famous worldwide doing impersonations of Carol Channing, Bette Davis, Mae West, Barbra Streisand, Tallulah Bankhead, Marlene Dietrich, Bette Midler, Anita Bryant, Shirley Bassey, Peggy Lee and Judy Garland.  In 1977, he starred in the film Outrageous!, based on a short story written by a friend and former roommate, and it won film festival awards.  In 1987, he starred in the sequel, Too Outrageous!.

In 1982, Craig married Lori Jenkins (1958 - 2008).  Lori was obsessed and in love with Craig and catered to his every need.  At times he found her suffocating and would push her away but other times needed her in order to feel loved.  They spent many years apart (Craig's choice while he lived in Europe) and she took him in when he moved back to Toronto penniless a couple years before his death. 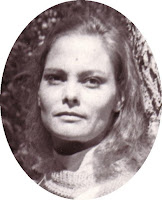 After Craig's AIDS-related, Lori became a dresser, working on some of the larger theatre productions that came to Toronto.  When she passed away from cancer, she was buried next to her husband in Port Perry, ON.

I like reading bios/autobios and this one caught my eye because Craig and Lori were Canadian and from Toronto.  I'd heard of Craig Russell but had never seen any of his work.

Both came from messed-up abusive childhoods ... Craig reacted by being as loud and flamboyant as possible and Lori was quiet and compartmentalized everything.  Lori loved Craig but he didn't love her back.  No matter how badly he treated her, she always stayed with him.  At some points, Craig had it all ... fame and fortune ... but he blew it all on drugs, alcohol and partying.  He had mental illness, which wasn't talked about then as it is today.  He acted out a few times and lost everything including money and respect.

I liked the writing style and it was obviously well-researched ... the author spoke with their family, friends and colleagues and had access to Lori's journals and daytimers.  Not only does it discuss Craig and Lori's life but it also gave background about what it was like being gay in the 1970s right up today.
By Teena in Toronto at 4:38 pm
Email ThisBlogThis!Share to TwitterShare to FacebookShare to Pinterest
Label(s): Books, Books - 2020, Brian Bradley, Canadian, Canadian 2020, Published 2020