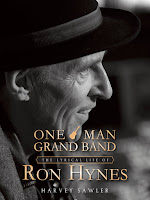 From Goodreads ~ Author Harvey Sawler traces the life of Ron Hynes, one of the most respected singer-songwriters in Canadian history. Through personal conversations and interviews, Sawler captures the spirit of an artist whose stock-in-trade has always been authenticity over mere commercial acceptability, providing rare insight into the life of the man who penned some of the country’s best-loved music.

Sawler guides us through the dark times of addiction to the triumphs of songs such as “Sonny’s Dream” and “Atlantic Blue” while capturing the true essence of Hynes and the source of his musical genius.

Ron Hynes (1950 - 2015) was a folk singer-songwriter from Newfoundland and Labrador and was known as the Man of a Thousand Songs.  He wrote the song Sonny's Dream, which has been recorded worldwide by many artists and was named the 41st greatest Canadian song of all time on the 2005 CBC Radio One series 50 Tracks: The Canadian Version.  He was a founding member of The Wonderful Grand Band, one of Newfoundland's most popular performing groups (formed in 1978) and had released seven solo albums.   Hynes was a seven-time East Coast Music Awards winner and past Juno and Canadian Country Music Awards nominee.  In July 2012, Hynes was diagnosed with throat cancer and underwent treatment.  He died in St. John's in 2015 at the age of 64.

I didn't know a lot about Ron Hynes.  I knew he'd written Sonny's Dream and that was about it.  But I like reading bios/autobios and it sounds like Hynes had an interesting life.

The book included interviews with Hynes' friends and colleagues, in addition to the author interviewing Hynes many times.  While there was a lot of detail about his tours and the author would go off on tangents about non-Hynes things, it is written at a high level with not a lot of details about his personal life.  Apparently Hynes had been married at least twice and had four daughters but this was barely touched on.  To me, if you are going to write a book about a person, this would be important information to include.  Hynes' drug addiction took him to the dark side and he died destitute but this was also covered at a high level.

The editing could have been better.  I found the writing was a bit repetitive.  It seemed like the chapters were written individually for a newspaper article, for example, because the author would tell who someone was in Hynes' life (for example, his friend and guitar player) and then later on say who they were again as if this was the first mention of them in the book.  Plus some of the stories were told a couple times ... as if they weren't told earlier.  It was weird.  And there were some typos ... on the same page, the Barenaked Ladies is spelled correctly but in a couple paragraphs above was spelled Bare Naked Ladies.
By Teena in Toronto at 8:37 pm
Email ThisBlogThis!Share to TwitterShare to FacebookShare to Pinterest
Label(s): Books, Books - 2019, Canadian, Canadian 2019, Harvey Sawler, Published 2016, The Canadian Book Challenge 13

Typos and bad editing would put me off reading this.

On another note, we saw Soulpepper's Riverboat the other night and loved it.