Founded in 1991, SummerWorks is Canada’s largest curated performance festival of theatre, dance, music and live art. The Festival is widely recognized as one of the most vital platforms for launching new Canadian work – locally, nationally, and internationally. For 11 days every August, SummerWorks hosts over 500 artists, performing in over 60 performance projects.

Over the last couple of years, Gord and I have seen many Summerworks productions and have enjoyed them.  This evening we saw Plucked.

It is playing at the Theatre Centre, which is in our 'hood. 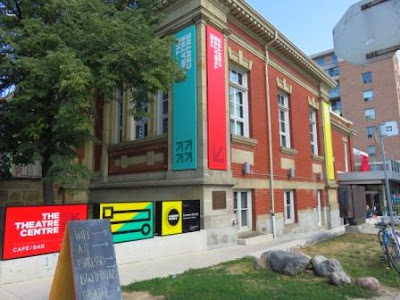 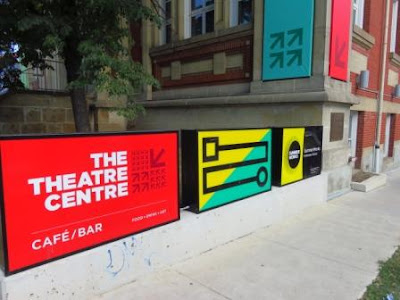 Infusing comedy, bluegrass music, and a complete lack of sentimentality, "Plucked" is set in a world where fear turns women into chickens, eggs are high currency, and vaginas are near-dangerous possessions. "Plucked" skewers patriarchy without holding punches. It exposes hard truths about fear and family. It’s funny because it’s fake; it’s vulnerable but it’s okay because it ends with a curtain call, but it’s not okay because it’s familiar. "Plucked" is, after all, a true story. It’s just full of lies.

Plucked is a story of how women become chickens and their eggs are coveted and sold for a lot of money.  Abigail recently turned into a chicken and her husband, Jerry, is waiting for her to start laying eggs so he can sell them.  He's also waiting for their daughter, Fourteen, to turn into a chicken so he can make money selling her eggs.  But she has other plans.

Yes, it's a crazy story but I got caught up in it.  There was singing ... the play is funny and tragic.  All the actors did a great job.  Tim Machin was the music director and also played the part of Rooster, the banjo-playing narrator.  After Abigail became a chicken, Sochi Fried did a really good job cooped up in a cage being a chicken.  Tyrone Savage was funny as the handsome "retard".  Qianna MacGilchrist played Fourteen.  She is the daughter of friends of ours and is the reason this play caught our attention.  I've known Qianna since she was a very young kid so it was interesting to see her in such an adult role (complete with swearing!).  She was excellent!

It was a fun play worth seeing.  As a head's up, there is swearing and some violence.
By Teena in Toronto at 6:30 pm
Email ThisBlogThis!Share to TwitterShare to FacebookShare to Pinterest
Label(s): Live theatre, Live theatre: Summerworks