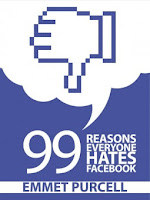 From Goodreads ~ Writer Emmet Purcell is a simple man with simple tastes. He likes keeping things short and simple, which is why Facebook appealed to him when it first surfaced. However, as it inevitably transformed from being a well-loved social outlet for friends and family into an egotistical, duck pose-laden, virtual farming-centric nightmare, he decided to take a humorous tongue-in-cheek "poke" at the social website in his new release 99 Reasons Everyone Hates Facebook.

“With over one billion worldwide users, Facebook has become a part of our social identity … for good or ill. Mostly ill,” says Purcell. “But rather than wag a disapproving finger at the website itself, I decided to point out such inanities as creating a Facebook page for your pets, giving out WAY too much personal information, Face-Bragging and being one of the 48,000 people who have been suckered into clicking on ‘Join if you love your dad/mom/Jesus.”

99 Reasons Everyone Hates Facebook consists of nine chapters that contain 10-12 "reasons" each, with each chapter focusing on some of the biggest Facebook offenders around. For example:

Reason #1 - Huge numbers of people gather together on Facebook to form the most pointless of groups
Reason #23 - Posting song lyrics as a status message
Reason #33 – Spending real money on virtual goods
Reason #64 - The plight of Facebook’s only other Mark Zuckerberg
Reason #70 - Facebook was mean to a really, really old woman
Reason #95 - Don't like Timeline? Tough luck

The author has listed 99 reasons he feels everyone hates Facebook ... it's amazing he could come up with 99 (and I found most of them valid)!  They are divided up by chapters:

I'm on Facebook and thought this book would be fun ... and it was.  The writing style was funny and sarcastic.

The author made note of a lot of things that annoy me too including:

If you're on Facebook, you'll probably be able to relate to a lot of the reasons in this book.
By Teena in Toronto at 10:00 pm
Email ThisBlogThis!Share to TwitterShare to FacebookShare to Pinterest
Label(s): Books, Books - 2013, Emmet Purcell, Published 2013