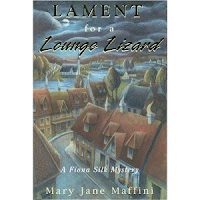 From Amazon ~ As if it weren't bad enough being a failed romance writer, poor Fiona Silk has to cope with the spectacularly embarrassing demise of her old lover, the poet, Benedict Kelly in her four-poster bed. It's exactly the sort of thing people notice in St. Aubaine, Quebec, a picturesque bilingual tourist town of two thousand. Now the police start getting nasty, the media vans stay parked on her lawn and the neighbours' tongues keep wagging in both official languages. Worse, someone's bumping off the other suspects. Can Fiona outwit a murderer in the mood for some serious mischief.

I read my first Maffini book last month and liked it so thought I'd check out others by her.

This is the first of two in a series of mystery novels featuring Fiona Silk. It's set in rural Quebec with a cast of colourful characters.

The story was so-so, not overly exciting. The characters are likable ... except for Fiona's best friend, Liz, who is a doctor and annoying. I liked Fiona's sense of humour. And it was nice to read a book with characters my ages, rather than in their twenties or early thirties. I hadn't figured out who dunnit so the ending was a surprise and brought the story together.

It's an easy quick read and I'd recommend it if you aren't looking for anything too heavy.
By Teena in Toronto at 8:18 pm
Email ThisBlogThis!Share to TwitterShare to FacebookShare to Pinterest
Label(s): Books, Books - 2010, Canadian, Mary Jane Maffini, Published 2003, The Canadian Book Challenge 4