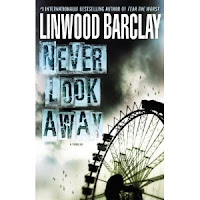 From Goodreads ~ A warm summer Saturday. An amusement park. David Harwood is glad to be spending some quality time with his wife, Jan, and their four-year-old son. But what begins as a pleasant family outing turns into a nightmare after an inexplicable disappearance. A frantic search only leads to an even more shocking and harrowing turn of events.

Until this terrifying moment, David Harwood is just a small-town reporter in need of a break. His paper, the Promise Falls Standard, is struggling to survive. Then he gets a lead that just might be the answer to his prayers: a potential scandal involving a controversial development project for the outskirts of this picturesque upstate New York town. It’s a hot-button issue that will surely sell papers and help reverse the Standard’s fortunes, but strangely, David’s editors keep shooting it down.

That’s a question no longer at the top of David’s list. Now the only thing he cares about is restoring his family. Desperate for any clue, David dives into his own investigation — and into a web of lies and deceit. For with every new piece of evidence he uncovers, David finds more questions — and moves ever closer to a shattering truth.

I must say that it took me a couple chapters to get into this book as I found the writing kind of ho-hum. But I'm glad I stuck with it because once it picks up, it's great.

Jan has disappeared and everything seems to point to her husband, David, to have killed her. The book is written in David's voice so you know what happened through his eyes and of, course, some it doesn't make sense. So you are carried along with him as he tries to figure out what happened and why.

My only real issue is at the end. Ethan, the son, is kidnapped (sorry for the spoiler, folks) and I thought it was lame as to who had done it, why and how that gets resolved.

I'd definitely recommend this one ... I enjoyed it a lot more than his last couple of thrillers.
By Teena in Toronto at 11:59 pm
Email ThisBlogThis!Share to TwitterShare to FacebookShare to Pinterest
Label(s): Books, Books - 2010, Canadian, Linwood Barclay, Published 2010, The Canadian Book Challenge 4