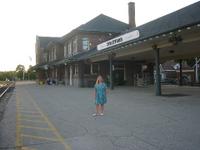 From Stratford Festival ~ Evil erupts in the seemingly innocuous setting of rural Ontario when James Donnelly, head of an Irish immigrant family, defies the attempts of a sinister secret society to drive him off his farm. This groundbreaking classic reveals the long-unacknowledged truth behind one of the most shocking episodes in Canadian history.

We are huge live theatre fans. For the last couple of years, we've had a Mirvish subscription. Nothing attracts us with the upcoming year of plays (could care less about the upcoming "Lord of the Rings") so we bought tix for other plays instead at theatres we've never been to (a couple for the Stratford Festival and one at the Shaw Festival).

The first of our two Stratford tix was The Black Donnellys today. We took the train. Why do the two hour drive when the train will take you there and back? We got there a bit early (1:00pm) so had a beer at a pub called Molly Blooms.

The play was at the Studio Theatre, a very small and quaint theatare. The play itself wasn't all that great - I gave it a 2/10 - but the entire Stratford experience made up for it. Stratford is a cute little town.

After the play, we walked through a park along the river to a restaurant called Sawyers. It advertises that it's on the river so we had visions of eating on a patio next to the river. Instead, we ate inside because apparently the bugs will attack you if you eat outside. Plus, you can't see the river because of all the trees anyway. The food was pricy but the portions were good and tasty. Then we walked back downtown again and had a beer at a pub called Sid's while we bided our time until it was time to go to the train station to head on home.

The train ride there and back was a nice experience. The cool part is that we ride right by our home (we are easily amused!).
By Teena in Toronto at 11:30 pm
Email ThisBlogThis!Share to TwitterShare to FacebookShare to Pinterest
Label(s): Live theatre, Live theatre: Stratford Festival

Taking the train over to see a play sounds like a great idea, and an awsume Club event. I have to look into this for next year. Any details you could send me, would be much appreciated!
~Angie