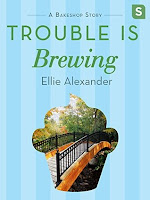 From Goodreads ~ Jules Capshaw, owner of the charming bakeshop Torte, meets Sloan Krause, who's in from out of town for the beer festival that has landed in Ashland, Oregon.  Sloan is the brewmaster at the famed der Keller brewing company that operates out of Leavenworth, Washington, and she’s come to the festival to show off the newest spring brew.
When Sloan drops in to Torte for a pistachio bar and a latte, she meets Jules, who is instantly smitten with the idea of incorporating beer into some baked goods. But when the two go off to sample some of der Keller’s brews, they realize that one of the kegs have gone missing. Is someone trying to steal the secret recipe? It’s up to Sloan and Jules to get to the bottom of this - and soon.
Juliet (aka Jules) was raised in small town Ashland, OR, but dreamed of seeing the world.  She grew up helping her parents in their bakery, Torte, and went on to culinary school.  After spending years working on a cruise ship as a pastry chef, she is now happy to be home and sharing ownership of Torte with her mother.
Sloan works for her in-laws' brewing company in Leavenworth, WA.  She is in Ashland for a beer festival and meets Jules when she stops in Torte for snack.  The two click and Sloan invites Jules to sample some of the beer before the festival starts.  When Sloan discovers one of their kegs has disappeared, she and Jules set out to find it.
This is the a novella that comes after the sixth one/before the seventh in the Bakeshop Mystery series and it was okay.  It is here that we are introduced Sloan, which started the Sloan Krause Series (which I've read and liked).
By Teena in Toronto at 6:57 pm
Email ThisBlogThis!Share to TwitterShare to FacebookShare to Pinterest
Label(s): Books, Books - 2021, Ellie Alexander, Published 2017