My pal, Franca, had a couple tickets for tonight's Dancing with Rage, a 90 minute one woman play with Mary Walsh.  She couldn't use them so gave them to Gord and I (thanks, Franca!).

I can't say I'm a fan of Mary Walsh ... I don't dislike her, I'm just not really familiar with her work.  I used to watch CODCO many years ago and liked it but never got into This Hour has 22 Minutes.

Dancing with Rage is playing at the Panasonic Theatre (Yonge/Bloor).  I haven't been to that theatre in many years ... since Forever Plaid was playing there.  I like this theatre ... it's kind of small and intimate. It was really warm, though, and there wasn't a lot of air circulating.

The crowd was just going in when we got there. 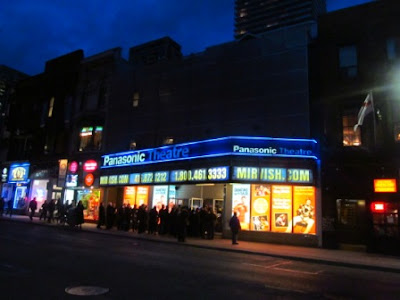 Mary came in from the back of the theatre as Miss Eulalie.  Miss Eulalie went into a tirade, picking at current events, as she headed to the stage.  I found this part funny.

When she got to the stage, as she is still talking, she became a different character, reading the story of the little girl who lived with her elderly aunts and uncle while her parents and siblings live next door.  I didn't find this funny ... I'm not sure if it was supposed to be.

Then the real story began and she became Marg Delahunty, who has discovered that she is going blind ... which sets her on the road to Ottawa to find the child she had put up for adoption when she was 16.  She determines it could be Prime Minister Harper or a girl who works at Joe Ortons (a play on Tim Hortons).  When she hears that her mother has died, Marg rushes home for the funeral and gets hammered (she hadn't had a drink for 16 years). The last scene has her playing five characters at the same time at the funeral home.

Sounds really serious, doesn't it?  Given that this is a Mary Walsh play, I had expected it to be lighthearted and funny ... but it wasn't.  It was fairly depressing and I didn't find it all that funny.

The play intermingles Mary being on stage with videos behind her with her playing different characters (for example, she is Marg in the video having a conversation with Mary on stage as a slimy cab driver).
By Teena in Toronto at 9:30 pm
Email ThisBlogThis!Share to TwitterShare to FacebookShare to Pinterest
Label(s): Live theatre

Eh, sounds like something I could live without seeing. But at least you got out and were able to have a nice evening with hubby! :)