Gord and I went to the Blue Jays' game this afternoon. We had completed a survey after a game we attended in May so we received free tix for today's game. The tix were in the "nosebleed" section (500 level seats) ... but free tix are free tix! 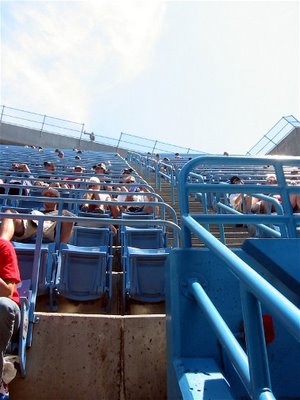 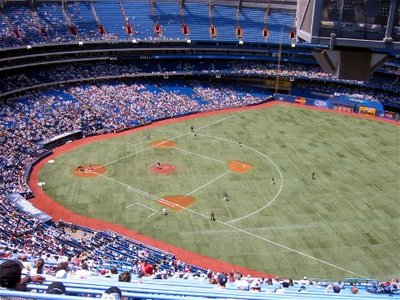 The view from our seats

We moved in the second inning to the first row of the 500 level seats, just behind first base. Much better seats!

It was a great game. We left after the tenth inning, though, when the game was tied. It was really hot (34C) and we'd been sitting in the sun for more than three hours. We went to a nearby pub with a/c to watch the end of the game.

It was Dog Days at the Rogers Centre today. Everyone was invited to bring their dog to the game. There were almost 29,000 people in attendance and 409 dogs (the most dogs since the promotion started four years ago). 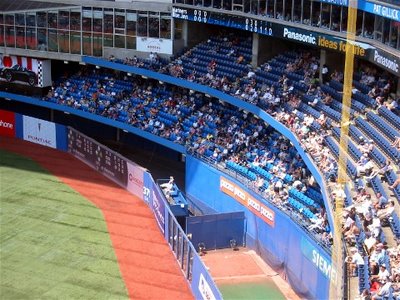 The doggy section was just on the other side of the Mariners' bullpen
(between the Pontiac and Pizza Pizza signs).

If you brought your dog, you got two seats ... one for you and one for your pooch. KC would have hated it. She's not interested in baseball and doesn't like hanging out with other dogs. She was better off at home with the a/c.

By Teena in Toronto at 6:05 pm
Email ThisBlogThis!Share to TwitterShare to FacebookShare to Pinterest
Label(s): Toronto Blue Jays

Cool! I am bringing Jesse next year! Oliver..ewww no!

My Lucy would have hated it too. She would have spend the entire time sitting in my lap staring at me with a look that said, "Why are you mad at me? What did I do to deserve this?"

The camera kept going back to the dogs. Some where having a snooze on their owner's laps. Others were trying to lick the camera :) All were friendly :) KC wouldn't have enjoyed being there for more than three hours at all.

Awwww - a fellow Jays fan - keewwwlll. My son was at the game the day before and stayed for all (what was it?) 14 innings.