I saw a post on Twitter last month that you could get free tickets to a taping of Family Feud Canada.  It sounded like a fun thing to do so I order a couple tickets for Gord and I. 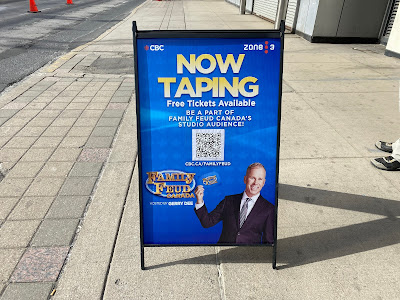 We had to be at the Canadian Broadcasting Centre downtown for 10:30am and would be there for the taping of two episodes.  You are advised that the entire duration (from arrival to departure) could be up to five hours but we were done in about three hours.
We had to sign a confidentiality agreement, our bags were checked and we had to go through a metal detector.  Except at the end when the answers to the win the $10,000 were revealed, we had to wear a mask (the camera is pointed at the audience during that segment).
It was a fun experience.  Our two episodes will air in the middle of October. It’s a lot of work being in the audience as we to clap and cheer enthusiastically often ... ha!
By Teena in Toronto at 2:00 pm
Email ThisBlogThis!Share to TwitterShare to FacebookShare to Pinterest

He is great, but contestants drive me crazy! Sounds like a fun time.