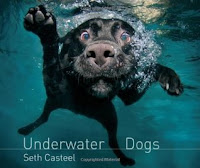 From Goodreads ~ From the water's surface, it's a simple exercise: a dog's leap, a splash, and then a wet head surfacing with a ball, triumphant.

But beneath the water is a chaotic ballet of bared teeth and bubbles, paddling paws, fur and ears billowing in the currents. From leaping Lab to diving Dachshund, the water is where a dog's distinct personality shines through; some lounge in the current, paddling slowly, but others arch their bodies to cut through the water with the focus and determination of a shark.

In more than eighty portraits, award-winning pet photographer and animal rights activist Seth Casteel captures new sides of our old friends with vibrant underwater photography that makes it impossible to look away. Each image bubbles with exuberance and life, a striking reminder that even in the most loveable and domesticated dog, there are more primal forces at work. In Underwater Dogs, Seth Casteel gives playful and energetic testament to the rough-and-tumble joy that our dogs bring into our lives.
I like dogs ... I like pictures ... I like pictures of dogs so this book caught my eye.
In 2000, Seth Casteel was taking pictures of a Cavalier King Charles Spaniel named Buster in a backyard.  Buster started knocking his ball into the pool and jumping in to get it.  Casteel wondered what he looked like underwater so he changed his focus and the photo shoot switched from being an "on land" theme to a "in the pool" one.
He went on to photograph more than 250 dogs, most of whom had never been underwater before or even been swimming.  Some of the pictures are freaky but underwater dogs show what retrieving means to them.  It's a quick read as it's just pictures, both full colour and black and white ... but it was a fun book.
By Teena in Toronto at 8:34 pm
Email ThisBlogThis!Share to TwitterShare to FacebookShare to Pinterest
Label(s): Books, Books - 2022, Published 2012, Seth Casteel