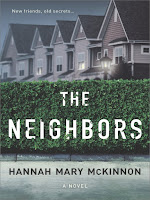 From Goodreads ~ After a night of fun, Abby was responsible for the car crash that killed her beloved brother. It is a sin she can never forgive herself for so she pushes away the man she loves most, knowing that he would eventually hate her for what she’s done, the same way she hates herself.

Twenty years later, Abby’s husband, Nate, is also living with a deep sense of guilt. He was the driver who first came upon the scene of Abby’s accident, the man who pulled her to safety before the car erupted in flames, the man who could not save her brother in time. It’s this guilt, this regret that binds them together. They understand each other. Or so Nate believes.

In a strange twist of fate, Liam (her old lover - possibly her true soulmate) moves in with his own family next door, releasing a flood of memories that Abby has been trying to keep buried all these years. Abby and Liam, in a complicit agreement, pretend never to have met, yet cannot resist the pull of the past - nor the repercussions of the dark secrets they’ve both been carrying.

Abby and her brother, Tom, were extremely close, even sharing a birthday just a year apart.  Their father had abandoned the family when they young and their mother wasn't warm and fuzzy.  Abby and Tom were out celebrating one night when they got in a deadly car accident.  Abby was drinking and driving and was thrown from the car but Tom couldn't get out of the car.  Nate had been passing by and came across the accident and wasn't able to save Tom.  He visited Abby in the Abby regularly and they became friends.  Abby felt extremely guilty for causing Tom's death and pushed away Liam, the love of her life, because he and Tom were close and she was afraid he'd blame her for Tom's death.
Twenty years later, Abby and Nate are married and have a teenage daughter named Sarah.  New neighbours and it's Liam (!!) and his wife, Nancy, and their son, Zac.  Abby and Liam pretend not to know each other and Abby avoids Liam, to the point of badmouthing him to Nate to keep him away.  But Nate's a friendly and helpful guy and has no problem being friends with Nancy and Liam, much to Abby's dismay.
This is the second book I've read by this author and I liked it.  I liked the writing style ... it is written in first person perspective from Abby, Nate and Nancy's points of view (the chapters are labeled so you'll know whose voice it is) plus there are Sarah's diary entries.  There were lots of twists and turns at the end, most I didn't see coming.  I didn't find Abby and Liam likeable, even more so as the story went on.  As a head's up, there is swearing and adult activity.
By Teena in Toronto at 9:30 pm
Email ThisBlogThis!Share to TwitterShare to FacebookShare to Pinterest
Label(s): Books, Books - 2022, Canadian, Canadian 2022, Hannah Mary McKinnon, Published 2018