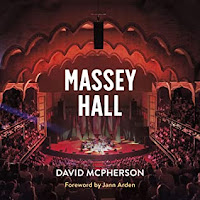 From Goodreads ~ Known for its intimacy and sense of occasion, a night at Toronto’s Massey Hall is magical for both audiences and performers. For many musicians, playing the hall is the surest sign that they have made it. Looking out over the crowd, performers often comment that they feel they have joined history as they stand on the stage where Sarah Vaughan, Miles Davis, Bob Dylan, and so many other legends have stood.

Based on scores of interviews and meticulous research, "Massey Hall" chronicles not only the historical and musical moments of the past 127 years but also the community of artists and supporters that has built up around the hall. Covering both emerging artists such as Shakura S’Aida and William Prince and musical giants from Herbie Hancock to the Tragically Hip, this full-colour book is a celebration of music, community, and our shared cultural heritage.
Massey Hall is a performing arts theatre in downtown Toronto ... I've been to many concerts there so was interested to learn more about it.  Plus I like to learn about history.
Opening in 1894, Hart Massey wanted to build a music hall in order to fill the need for a meeting place where people from the Toronto area could meet and enjoy choral music not of a religious theme. He also wanted to construct the building in memory of his son, Charles, who loved music.  Massey also did not want the music hall to make large profits ... he wanted both rich and poor to attend events.  It closed in July 2018 for a two-year-long renovation including a new seven-storey addition and two smaller concert rooms and recently reopened.
The book covers a lot of information:
There were many pictures and it was interesting to see how styles and tastes had changed over the years.  It was entertaining to hear stories about Massey Hall, especially from performers.
By Teena in Toronto at 10:40 pm
Email ThisBlogThis!Share to TwitterShare to FacebookShare to Pinterest
Label(s): Books, Books - 2021, Canadian, Canadian 2021, David McPherson, Published 2021