Gord and I did the Toronto Transect Tour: History along the 501 Queen Line through Heritage Toronto this afternoon.

Ride a chartered bus from one end of the 501 Queen streetcar route to the other. This is an exploration of the neighbourhoods, buildings and landscapes that line the route – from The Beach and the R.C. Harris Filtration Plant in the east to Long Branch and Etobicoke Creek in the west.

The tour started at city hall (so in the middle of the route near the Bay Street stop) at 1pm and was three hours.

The route was first instituted in the mid-to-late-19th century by private operators as a horse-drawn line, was later electrified, and was assumed by the TTC upon its creation in 1921. Service is provided 24 hours a day, though the route number changes to 301 Queen late at night.

The bus was full. 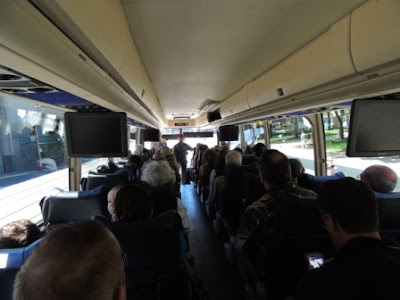 Katelyn from Heritage Toronto got us started. 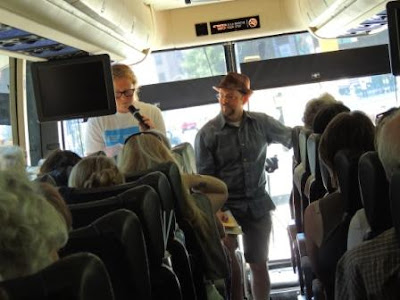 Wayne Reeves, City of Toronto Museum Services, was our guide and was very knowledgeable. 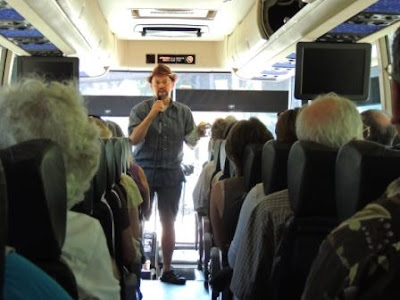 We started heading west and drove along Queen Street W to the Long Branch Loop, the end of the line on the west end  We spent some time having a tour of that area.

Then we headed eastward on the Gardiner to Neville Park Loop, the end of the line on the east side.  The bus then headed westward along Queen Street E to city hall.

It was an interesting bus tour and it's amazing how Queen Street changes as you go through the different areas (from east to west) of the Beaches, Leslieville, Riverside, Corktown, downtown, Queen West West (where Gord and I live), Parkdale, Brockton, Swansea, Mimico, New Toronto and Long Branch.
By Teena in Toronto at 4:00 pm
Email ThisBlogThis!Share to TwitterShare to FacebookShare to Pinterest
Label(s): Heritage Toronto, Toronto

What a cool tour.