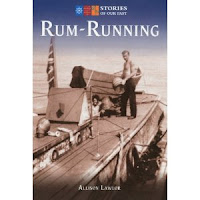 From Amazon ~ Lawlor chronicles the history of this furtive trade and recounts the exploits and escapades of the East Coast's most infamous liquor smugglers. Complete with enthralling first-person accounts, fact-filled sidebars, and more than 60 photos, this accessible read is the rollicking story of one of the most captivating and controversial chapters of Canadian history.

It's a quick read ... he finished it a couple days ago. I like rum and I'm from Nova Scotia so read it too.

It was interesting to learn more about the rum running which became popular during Prohibition in the early part of the 20th century.

While I thought the information in the sidebars was interesting, I found the placement of them in the middle of paragraphs annoying as they served as an interruption of the flow. A better spot for them would have been at the end of the sections or even at the end of paragraphs.