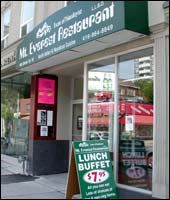 From Toronto.com ~ Mt. Everest Restaurant, newly opened in the Annex with a menu of South Asian mainstays, is staking a claim on Toronto's taste buds in the shadow of one of the most popular Indian spots -- the mighty Nataraj. Success in such a competitive market may require Sherpa-like tenacity and a mountain of luck. But Mt. Everest gets a boost from a supplemental bill of Nepali fare, touted as the city's first.

This is the second time I've been there. There's not a lot of choice in the buffet ~ two chicken, one goat, one rice, and a couple of vegetarian. The Tandoori chicken is good. The buttered chicken is okay ~ the sauce is good but they use very bony pieces. Today the first batch of rice was cold and crunchy. Though I left full, given a choice, I probably won't go back.

But I got some exercise as I walked there and back (about 45 minutes each way).
By Teena in Toronto at 2:23 pm
Email ThisBlogThis!Share to TwitterShare to FacebookShare to Pinterest
Label(s): Mt. Everest Restaurant Toronto ON