From Goodreads ~ Detectives dig into the dark side of Toronto when a serial killer targets homeless people who are camped out near one of the city’s most exclusive enclaves in this latest crime thriller from bestselling author Robert Rotenberg.

Exactly what is one person’s death worth?

For decades, the Humber River Golf Course has been one of the city’s most elite clubs. All is perfect in this playground for the rich, until homeless people move into the pristine ravine nearby and tensions mount between rich and poor and reach a head when two of the squatters are brutally murdered.

The killings send shockwaves through the city and suspicion immediately falls upon the members of the club. Protests by homeless groups and their supporters erupt. Suddenly the homelessness problem has caught the attention of the press, politicians and the public. Ari Greene, now the head of the homicide squad, leaves behind his plush new office and, with his former protégé Daniel Kennicott in tow, returns to the streets to investigate. Meanwhile, Greene’s daughter, Alison, a dynamic young TV journalist, reports on the untold story of extreme poverty in Toronto.

With all the attention focused on the murders, pressure is on Greene to find the killer - now. He calls on his old contacts and his well-honed instincts to pursue the killer and save the city and the people he loves. But then a third body is found.

A riveting page-turner ringing with authenticity, "Downfall" is a scathing look at the growing disparity between rich and poor in Canada’s wealthiest city.
When a homeless man is found murdered near a ritzy golf course, no one cares.  When a second homeless person, this time a woman, is found murdered near the golf course, people start paying attention and demanding answers.  Ari, the head of the homicide squad, is in charge and he and fellow police officer Daniel are feeling the pressure as they investigate.  Ari's daughter, Alison, is a TV journalist reporting about the murders and as she gets to know a doctor who is fighting for the rights of the homeless, she becomes more involved in the cause, which may put her at odds with her dad.

This the sixth book by Rotenberg I've read and I enjoyed it.  Though it's the six in a series, it works as a stand alone because there is enough background information provided.  It is written in third person perspective with the focus on wherever the action is.  I like the writing style and it moves at a good pace.

I like that this series is set in Toronto.  The author is quite specific about the locations so I know exactly where the action is taking place and I have been to a lot of these places.  Ari enjoys Caldense Bakery, which is just north of me on Dundas Street W.  I went for a walk on Monday to the Humber Bay Arch Bridge, near where the golf course is supposed to be, and walked across the bridge on the cover of the book (about a 15 minute drive south of me). 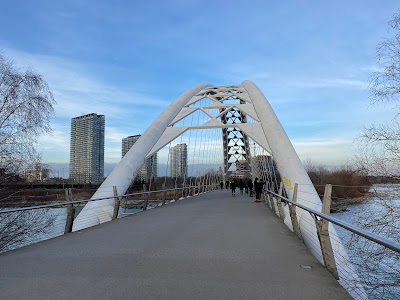 I look forward to the next book in the series!
By Teena in Toronto at 8:00 pm
Email ThisBlogThis!Share to TwitterShare to FacebookShare to Pinterest
Label(s): Books, Books - 2021, Canadian, Canadian 2021, Published 2021, Robert Rotenberg