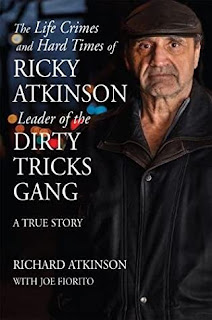 From Goodreads ~ A sober memoir that provides a solid understanding of how crime is situated in structural, cultural, historical and situational contexts.
This is the life story of Ricky Atkinson, leader of the Dirty Tricks Gang, who grew up fast and hard in one of Toronto’s toughest neighborhoods during the social ferment of the Sixties, during the fledgling Black Power Movement in Canada. His life was made all the more difficult coming from a black, white and aboriginal mixed family. Under his leadership, the gang eventually robbed more banks and pulled off so many jobs, that it is unrivaled in Canadian history.
Follow him from the mean streets to backroom plotting, to jail and back again as he learns the hard lessons of leadership, courage and betrayal. Today, after reconciling his past and life, he works to educate youth and people from all backgrounds about the no-win choice of being a criminal.
Ricky Atkinson is a criminal (former criminal?) here in Toronto.  His father's family was Black and aboriginal from Nova Scotia and his mother was white and from Sudbury, ON.  His homelife was turbulent and at a very young age he turned to crime (he grew up not to far from where I live).  Ironically his father was influential in cleaning up Alexander Park (Bathurst/Dundas) when it was full of guns and gangs (a housing project was named in his honor).
Ricky was the head of a gang called the Dirty Tricks Gang during the 1970s and 1980s.  They were involved in many bank and credit union robberies, jewellery heists and drug running.  The police understandably hated him and his gang and were always turning on the heat.  Ricky has spent more than half of his life (he was born in 1955) behind bars in various prisons and jails, mostly in Ontario.
While I found his story interesting, I didn't find him likeable.  It sounds like he was quite intelligent and was encouraged to do good along the way but chose not to, which I found frustrating.  He had friends who were killed, he fathered children that he didn't get to spend a lot of time with because he was incarcerated so much and he was always watching his back.
This book could have been edited better as there are typos.  As a head's up, there is swearing.
By Teena in Toronto at 10:06 pm
Email ThisBlogThis!Share to TwitterShare to FacebookShare to Pinterest
Label(s): Books, Books - 2022, Canadian, Canadian 2022, Published 2017, Richard Atkinson