One of my favourite movies is Pee-Wee's Big Adventure.  I've seen it tons of times but never in a theatre on the big screen.  It was playing tonight at the Royal Cinema (on College Street and Clinton Street).  Gord's not a fan of the movie but knows I like it so offered to go if I wanted to go.  I bought the tickets before he could change his mind!

Screen Queens is one part Mystery Science Theatre, one part Drunk History, with a dash of Elvira and add lots of booze. Get ready to experience movies like never before.

The cartoonish and childish character Pee-Wee Herman goes on a big adventure for the first time ever when his beloved shiny new bicycle is stolen by his nemesis Francis Buxton, a fellow man-child and neighborhood rich "kid." And he sets off on an obsessive cross-country journey, determined to recover it.

ABOUT US: Come join the one and only drag queen extraordinaire Allysin Chaynes for a cinematic journey through your favourite cult films. FULL movie, live and potentially very drunk commentary, special guests, performances, drinking games and plenty of surprises. This is a licensed event. 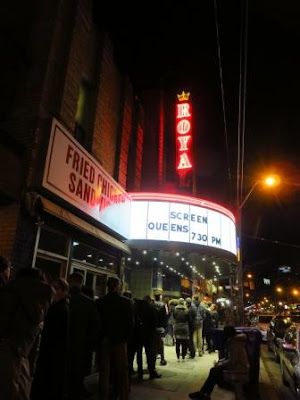 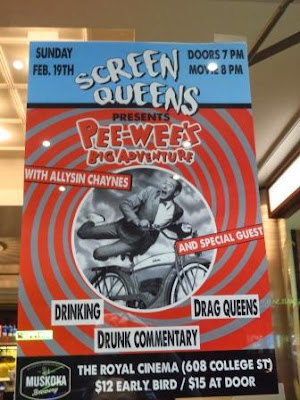 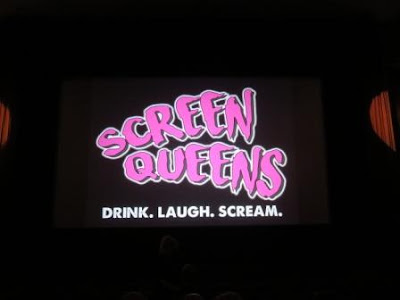 It wasn't well organized at all.  The doors didn't open until 7:45pm and the movie started at 8:30pm.  The line-up at the concession stand was so long they delayed the start of the movie ... had they opened the doors on time, they could have started on time.

The hosts were a couple drag queens.


I knew ahead of time there were be "commentary" by the hosts.  I thought it would be like the Die Hard Quote-Along we've been to the last two years ... the host occasionally jumps in with comments.  Not here!  Allysin and Fisher babbled non-freakin'-stop the entire time and weren't really funny.  They were louder than the movie so it's a good thing the movie was closed-captioned because it was hard to hear what the actors were saying.  It was annoying but I was able for the most part to tune them out.  Plus I've seen the movie so many times that I could recite a lot of the lines.

There was an intermission halfway through the movie.  It was obvious Gord wasn't enjoying the movie either so we left.
By Teena in Toronto at 9:30 pm
Email ThisBlogThis!Share to TwitterShare to FacebookShare to Pinterest