This week I downloaded Charlie's Boogie, the debut album by Newfoundland's "acclaimed guitar aficionados", Duane Andrews and Craig Young ... and I liked it!

Their songs have elements of gypsy jazz, bluegrass and traditional Newfoundland tunes.  Check 'em out:

Duane Andrews’ music is the product of a great ear, an adventurous spirit and a love of music that is beyond category. Uniting what would seem to be impossible – traditional Newfoundland music with the Gypsy Jazz of the legendary Django Reinhardt, Andrews makes it not just work – he makes it soar. As a multiple award winning guitarist, composer and producer he has literally brought his music to audiences around the world from his home in Newfoundland, Canada, to Tasmania with stops in between on stages such as the Newport Folk and Cork Jazz festivals.

Originally from Francois, NL, Craig Young has been playing the guitar since the age of seven and started playing in his first band around the age of thirteen. Rock n’ roll and country music became the main avenues of learning and a move to Alberta in 1993 allowed for Young to play lead guitar with several prominent local artists on the club scene. Eventually as a member of the Terri Clark Band, he relocated to Nashville, TN, where he was based for nearly eight years while touring extensively and performing regularly on stages such as the Grand Ole Opry and with other superstars such as Ricky Skaggs. Craig has won four CCMA awards for The Canadian Country Music Association All Star Band – Guitarist category and has had several top 40 singles, including the Top 10 Video on Canadian CMT for “You Can’t Take It With You” with the wonderful help of Terri Clark. Craig now lives and performs in the St. John’s area and teaches at New Wave Music in Paradise. 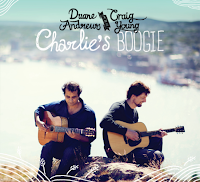 Duane and Craig are taking Charlie's Boogie on tour across Eastern Canada.

The tour kicked off last night in London, ON.  I was invited to their show tonight here in Toronto but was unable to make it.

If you'd like to attend one of their shows, here are the tour dates: